The Valravn was created by Armorbeast 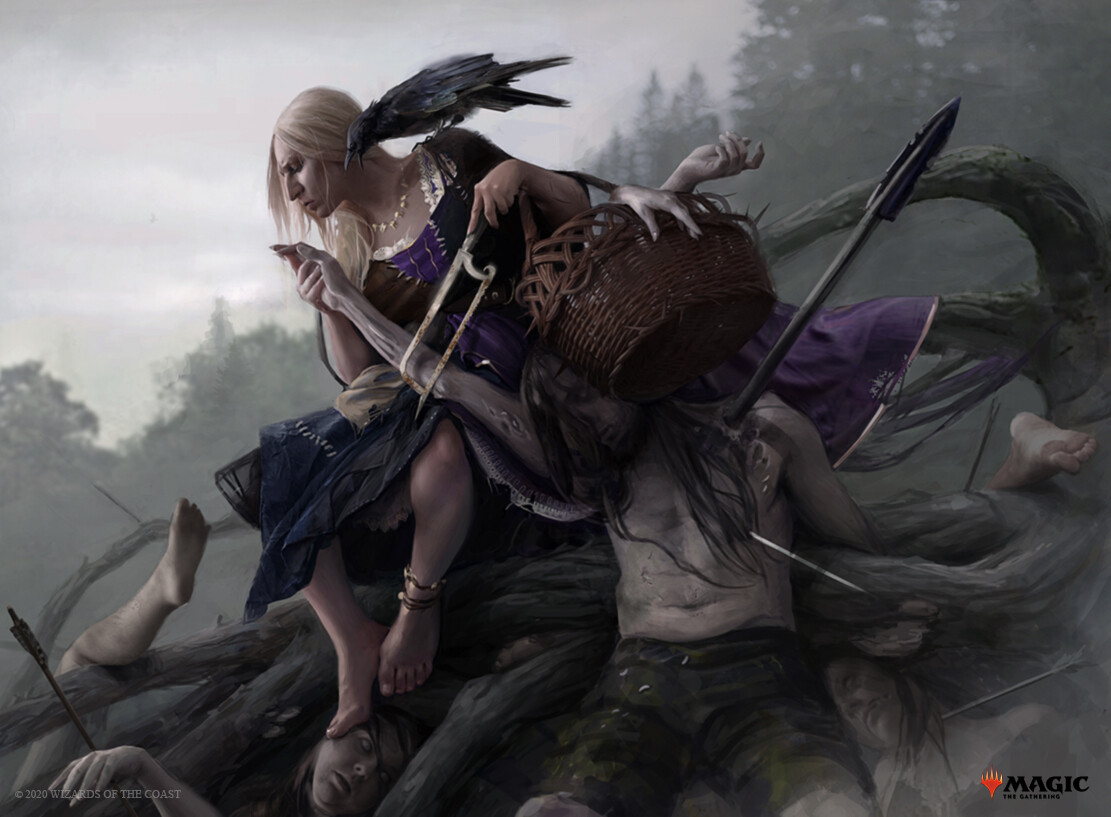 The Valravn (Raven of the Slain) is a supernatural being created by Valkyries as traveling companions. Their lives begin as ravens enchanted by the Valkyrie while still within the egg that will seek out their creators when first taking flight. While they feast upon the bodies of those slain in battle, these ravens might merge with a body that appeals to them for whatever reason. Thus is a Valravn fully formed gaining the ability to take on a human shape and the appearance of anyone in that person's direct lineage to disguise themselves.

Valkyrie are also accompanied by Vargr (a Norse werewolf) and when they are slain, the Valravn will sometimes merge with them to achieve this transformation. When they physically merge with a human, they acquire that person's memories, and sometimes the soul of this person survives within the Valravn becoming a Wraith . But the purpose of this merging is to gradually give the Valravn a sense of sapience until developing a personality and identity of their own. Ravens , by their very nature, are already intelligent creatures lacking in many aspects relating to the human condition.

Capable of transforming into a raven or a wolf, they can also assume characteristics of the Skríkja (a Norse Harpy ; screamer) or a Vargr of which they are neither. Valkyrie are also trained in healing warriors on the battlefield learning these skills from the Valkyrie Eir (sometimes called Hǫð eir ; battle-healer) before passing them on to Valravn. Valravn were not as adept as Valkyrie at healing but they were more curious about the processes of life. They learned how to make sutures, mend broken bones, to use their own urine as an antiseptic, and to make men sleep so as to ease their pain.

Valravn developed the ability to sense cellular life remaining within the bodies of the dead which the Gün tívar (aka Val tívar ) god Hár bani taught them the art of harvesting. These would be used to transplant to the living left to die on the battlefield becoming known as Seiðr fjǫr and most of those healed in this manner survived to become Varðlokkur (Warlock). Valravn who thus gained their freedom became servants to the Güntivar "Goddess of Death" Hellirūna (after which the goddess Hela is named) as followers of the Idisi ruled over by Sinthgunt .

The curse (or blessing) of this would be that the living inherited the cellular memory of the dead creating personality changes or gifting them with abilities they did not possess before. Although associated with death, the Valravn perverted their teachings when one of their number called Anda put together a patchwork man from select body parts. Possessing a shard broken from the hammer Hausakljúfr (skull-splitter) of the giant Hrungnir , Anda invoked the rage of the goddess Þrúðr (aka Torunn ) striking Anda's creation with a bolt of lightning creating something... forbidden!

The result was that a form of life would be restored to the flesh and, much like the Valravn themselves, led to the creature possessing memories and a personality of its own. Unlike the Valravn, these creatures were more a form of the Undead possessing human intellect but being prone to bouts of madness and often lacking in feelings like empathy which they find difficult to understand. On an emotional level, these Sceadugenga (shadow goer; Grendels ) are often more like animals known for their strength and endurance but could also use the power of transformation to hide their scars.

Many of these creatures would be disfigured in some way but there were some who achieved a sense of perfection and beauty. Such practices are considered necromancy and were forbidden because such lifeforms are at first devoid of souls which can develop after an unnatural fashion akin to vampires and zombies. The Valravn wouldn't just practice this on the bodies of others as they also practiced their art on themselves hiding their scars with vibrant tattooing. Sanngriðr ( Aglæc-wif ) is a Valravn originally created from a descendant of Cain being part devil and part dragon.

When the Valkyrie she served was killed by a god, she stole away with the body of her mistress Sanngriðr and set her Varðlokkur followers to work blending their bodies together. Seen as impure when she tried to reassert herself as a Valkyrie, Sanngriðr joined the Idisi who accepted her. Through her, the Valravn began an evolution as Sanngriðr shared her energies with them transforming them into something more like herself. Something about certain human souls attracts them, a sense of purpose that their lives remain unfinished which Valravn often lack so that they grant the soul use of their bodies.

They are sometimes thought to be the male partners of the Valkyrie but often appear as female when in the presence of mortals whether that's what they were originally or not. This sexual ambiguity is a result of their shapeshifting abilities to change their appearance to that of anyone in the lineage from which their original human form originates. When becoming a wolf, the Valravn is as obsidian black as when they become a raven or assume their wereling form. By being at least part Wraith, the physical forms they assume are difficult to injure because they heal so quickly being vulnerable to devil's fugue and enchanted platinum weapons (not silver).

Powered by Kunena Forum
© 2022 by RocketTheme. All rights reserved.